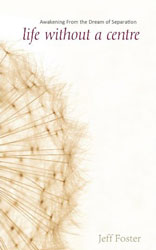 Life Without a Centre

We try to escape from the play of life and the suffering that being “a person in the world” entails. Our efforts to find spiritual enlightenment have the opposite effect and reinforce an underlying feeling of lack, of separation. In Life Without a Centre, Jeff Foster suggests that there is only ever the present appearance of life, with no individual at its core who could ever escape even if they wanted to. The entire spiritual search is nothing more than a game we play with ourselves, the cosmic entertainment. Jeff cuts through the confusion and frustration surrounding the search for escape through spiritual enlightenment, by pointing to the utterly obvious: This moment, and everything that arises in it, is already the liberation that is sought. Life, just as it is, is already what we’ve been searching for our entire lives. Jeff Foster graduated in astrophysics from Cambridge University. Soon after graduation, life events propelled him onto an intense two-year spiritual search, culminating in the realisation that there was never anything to find in the first place. He currently writes and talks on what some people have called “non-duality”, but which he just refers to as “the utterly, utterly obvious”.